As weird as these pizza slices may seem, they were delicious. The pizzas are originals from a little known pizzeria in the area. Everything - and I mean everything - they make is great. 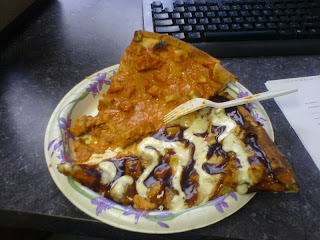 My lil' cuz wrote this poem for an assignment when he was in middle school; dude is one of those guys that are funny without them knowing. You can just feel the emotion, the indignation. He got an A-. Could've gotten a straight A had he plugged in that apostrophe in brothers and the comma after the last me. 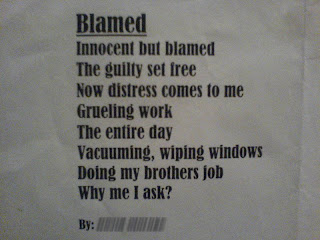 For some reason this, at my co-worker's desk, cracks me up. 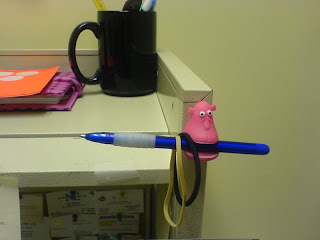 Saw this on a dumptruck while stuck in DC area gridlock. It's not meant for we commuters, I know, but doesn't it look like someone had pushed already? 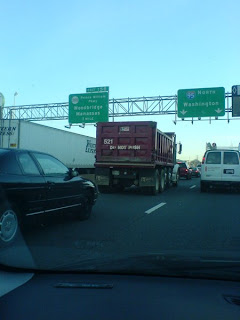 Came in to work this morning, turned the computer on, moved the mouse but the cursor wouldn't move. I unplugged and replugged it with the same result. Annoyed, I flipped it over and this is what I saw. Boss-man got jokes. 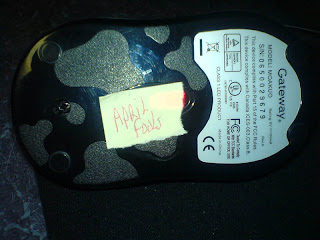 that button is too easy, pun intended. my boss has a thing that if you tap, swears at you, i worry about him sometimes.

now i am hungry, and informed. very odd combination. i was hoping to see the scuffed monitor.

Your boss has a lot of time on his hands:)

that poem is hilarious! be sure to read it at his wedding, it beats any 'when he was little' speech ten-nil

ps: you are NOT eating pizza with a fork...oh the SACRILEGE!!

>31337 - A button that swears?! Nice! Does it have multiple expletives or just repeats one over?

But hey, he signs my paycheck.

>CB: Yeah, that poem gets me every time! Great idea - I'll save that poem and embarrass the heck outta him when he's older!

Fret not - on any other day, you'd never find a slice of pizza and a fork around me at the same time. But that top slice had some sauce on it that had fluid-like dynamics!

Yeah, he's alright. When he's good he's good but when he's bad he sucks. But at least I know how to handle his - shall we say - mood swings; that's the important thing.

oh it has a vocabulary that would make a sailor blush!