I feel like Ice Cube, coz today was a good day. I didn't even have to fantasize about smacking someone upside their head, and that's an urge I suppress at least once every day. Then, I thoroughly smoked a Honda Civic Si and a Mazda RX8, all much more powerful cars but driven by rookies. Amazingly, work wasn't even half bad today, and if you're a regular here you know I'm always ranting about work.

Speaking of which, work used to be a lot more fun a few years back, particularly because we could pull all these pranks on each other all day. Sadly, we can't do it any more, bossman said. It's amazing though how much those simple pranks vastly improved the whole working experience. Hmmm, while I'm at it, let me think of some of the pranks we pulled...... Alright, here we go:

- The fake camera in the women's restroom that was only visible when sitting on the bowl, and of course by then it would be too late

- The walkie-talkie in the medicine cabinet in the men's restroom. You'd be doing your thing when, right next to you, you'd hear someone yelling out something like What's that pimple on the underside of your d*ck?

- [I'll take credit for this one] Remotely opening and closing the CD trays of someone else's computer in quick succession, repeatedly. The look on their faces was priceless.

- Making prank calls to the Korean delis in our business complex. We used to call them all the time, at least once a week actually, placing orders for non-existent items like barbecued cornflakes or rice on a stick. The all-time winner though was Justin's very convincing performance, talking about: My name is Porter. I just ordered the Swiss steak from you guys and it's tearing my ass out! There's Swiss steak everywhere!!!

- The chocolate stains on the men's toilet seat. True story: I went into the restroom, shut the door and turned on the lights only to see brown streaks all over the toilet. I was SHOOK! I realized in a flash that it was an elaborate prank and promptly stepped out the restroom only to see the other guys right outside laughing their asses off, one of them munching away at a Hershey bar!

We're a graphics company and also make lots of signage and stuff, and best believe we use a lot of those for pranks. Like, my boss planted a sticker on one girl's car that read, and I kid you not, Honk if you like bi+ches. On the ride home and back to work the next day she was intrigued by all the guys honking at her until she suspected foul play and sure enough, found the sticker sitting all nice and pretty on the trunk. Wow.

There are lots more worse stickers than that one which I will not discuss at this time, but here are pictures of some we still have lying around: 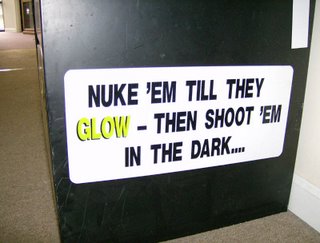 This one was one of many that were made after 9/11 when most, if not all, Americans were seething. We sold a lot of these, surprisingly. 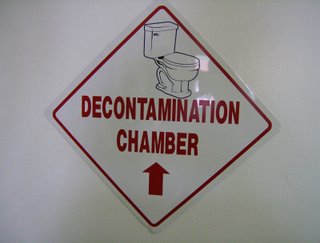 This one's still on the men's bathroom door. 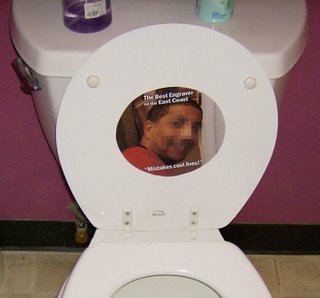 This one's of my boy, kissing our asses all the time. 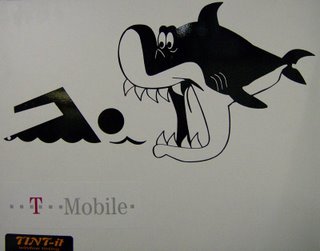 Boss-man made this one about the time when sharks were snacking on Florida & Ocean City surfers. 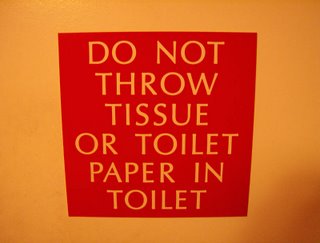 A customer wanted us to make a bunch of these signs and we were like: Ummm, so what exactly can you use in the place of tissue or toilet paper? 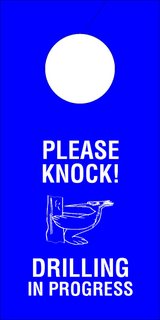 This one, that hangs on a door handle, was made by yours truly for my girl A.

Well, that's pretty much it. Most of the really good stuff we got rid of, sadly.

I did mention today was a good day, right? Well, right after work I went for my lil' cuz's basketball game. He did good, scored 6 points in like 10 minutes. Scrutinize the photo for specifics. 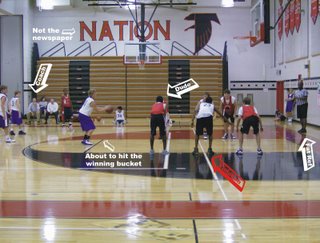 They were thrashed this time around. But then again, they were battling the best team in the county. And yes, he's dude in the photo. 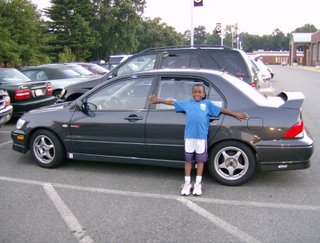 The young'n & I about to go back home after the basketball game.

Nice pics!The stickers rock!I'm shocked you let the young un stand against your car since it seems to be the love of your life!

Very funny, Aco & Buff! I must admit I love the car. But then again, I can do perfectly fine without it, really. I almost totalled it twice anyway, and with such close calls comes humility - and detachment. Here today, gone tomorrow. Knowwhati'msayin'?

And Buff, the feeling that comes with smoking a better, faster car is indescribable. Next time you're in the big VA holla at your boy and maybe I can give you a gut-wrenching demo, how about that?

Those signs are funny as shit...

lol @ violation in the bball pic?

you coming thru for the munyama tourney?

its august 5th....silver spring, bring your squadron..lol, on the real you should coem thru..

August 5th, huh? I just might come thru and test my no-skillz! Shoot, might even come thru with dude, now that he thinks his game is sick!

Nice pics...stickers were hilarious...n i loved ur critique of the b-ball pic. Speakin of ur "love"...i know u n no u can't do w/o it. Yes, maybe not the particular model, but u gotta admit, no matter which car u got, its ur baby, n ur attached to it.

Still waiting for the promised call, the video, my birthday gift from whenever, ur trip up, etc.....n the list goes on. Holla!

>D: Wsup baby gurl. My fault, again, for the incommunicado. I blame it on the paper-chase, what can I say.

By the way, today's Steve-O's last day as a single dude. You better do what u gotta! LOL!

>Shaw: Wsup girl. Naw, it's not even like that - about the whip. I haven't, and won't, mess with the whip no more.

Awwwww....Steve's jumpin the broom tmrrw???? Damn...a true loss to all women in the Metro area!! I'll forever pine over what could've been...sike!

Wish him the best of luck for me. As for u, keep apologizin.

And WTH would I be doing in the big VA exactly??? You done lost your mind!

Another one bites the dust, eh?

Ummm, u know imma tell him what u said, right? If only to start some sh*t?

Always gotta be instigatin huh?
That's aight tho....hopefully one day u'll get to experience the same level of affection in ur life. Until then....

Don't front; what we have between us is undeniable!

I see my speeding and smoking lessons continue..what would I do without this blog...

Tell you what si you make one stickie for your groupies ( I know you said you dont have groupies, lakini me I dont believe you) Will wait for mine...

The kid looks exactly like you...am kidding but he is cute!

>D: The dishwasher can kiss my a$$!
Just kidding. Wouldn't wanna create a rift between you two lovebirds!

>Farmgal: Wsup. U know, you'd be proud of me tonight on my drive home - was actually driving at the speed limit!

Ha ha, no groupies here! In any case, I very well can't give you the same sticker as they; it'd have to be specially made! ;)

>d® your speed limit ama?
'washa maogo'
waiting for that sticker....and tebu autograph it for me (insert a sweet smile here)

Ur attempts at creatin a rift further let me know of the void that exists as a result of this missed love. It's ok. Ur day shall come. Dunno when, n time is a'tickin, but it will. lol. (Shoulda, coulda, woulda)

>Farmgal: No, really. THE speed limit. Of course that was just one time tho; was back to my usual speed-loving self the next day!

>D: Tho I realize the gravity of the matter, that was funny!
Oh, and did you know The Dishwasher called me up and let me have it? Tell your man to chill out; I was only kidding!
Your boy Steve-O's wedding was off the chain too. I'll tell u all about it; I'm sure you'll wanna hear it!

"...barbecued cornflakes or rice on a stick." Hilarious. Loving ur blog.

Thanks; glad I'm not completely boring you!

>D: For the record, I wasn't crashing. Steve-O's my boy! I did learn tho that weddings are the perfect places to 'get in,' if you catch my drift!

Erroneous! Erroneous! Erroneous on [all] counts! u might not have been crashin, but u went w/ the objective to crush...if u get MY drift...n yes i got urs too. So, how many flowergirls did u dance w/? Mother of the bride? ne Balloon bikes, clown? I bet u sold the purple heart line good huh? "We lost so many good men out there."

Hard as it might seem to believe, I was a really good boy. I was standing on the sidelines the whole time, figuratively speaking.

I did try the 'i'd rather not talk about it' line. Trust me, it works!

HAHAHAHA...I knew u tried SOMETHING. Sidelines huh? how were the crab cakes then? lol. jk. Glad u enjoyed it...i'll forever lament on the shoulda coulda wouldas...sigh!