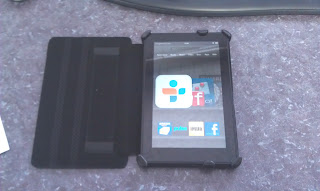 "Hi. My name is |d®| and I'm a recovering electronics junkie."

It's true. Put me in an electronics store with a credit card in my pocket, and I was guaranteed to leave with something. It never got too bad, to the point of getting in debt over it, but I bought a lot of unnecessary sh*t. I'd look at something and be like: Cool. I need one of these.

Which means that a few weeks ago, when I had to move, I was aghast at the electronics junk I've accumulated over the years. I had boxes stacked in the closet full of stuff, believe you me. I'm old enough to be practical so I decided to part with some of my toys, the ones I hadn't used in over a year. Let's just say I threw away three-quarters of everything and I still have a big 'ol plastic container full of Lord-knows-what.

Which brings me to the point of this tale: I've always wanted an iPad since its inception. I mean, who doesn't? They're freakin' amazing. I'd sometimes go to Micro Center, my favorite store, and play with them there, but I soon stopped doing so for a pretty good reason - messing with an iPad would make me want it more. More to the point, there was no f-in way I was gonna pay at least $500 for something I didn't need. I mean, you can do way more with a good ol' laptop, and I had that already. Plus, protective case or not, it was probably only a matter of time before I or someone else dropped and broke it, like I did my dearly departed Kindle.

Which is why I was über-excited when Amazon announced they were busting out their own tablet, the Kindle Fire, and for a (comparatively) measly $199 too. I was sold before I even saw it. Shoot, I even pre-ordered that mofo, and for 3 reasons:

1. I could read Amazon's (or B&N's, or anyone's) books with it
2. Anything else it could do would be a bonus
3. Did I mention it cost less than half the price of an iPad?

A few weeks later it came over, and I love it. It's not as good an e-reader as the original kindle, but I can hold it in one hand; the iPad is a two-handed affair. It's merely OK at surfing the web, and it can be sluggish at times. (Amazon's working on changing that, at the time of this writing)

The best thing about it is that Amazon didn't lock it. In a few minutes you can install almost any old app from Android Market, which I did that first night. And did I mention it cost $199?

Problem is, Jeff Bezos, Amazon's founder, is a smarter man than me. This Kindle is lighting my wallet up, burning my money. No wonder they call it the Fire. For real. Amazon content is right there at your fingertips, and after you read that book or watch that movie it suggests other title for you. Right there. It's freakin' brilliant - for Amazon.

Hello, my name is Nikolas and I am an electronics junkie.

Sent from my iPad.

*I shall go sit quietly in the corner now*

Hi, My name is Guess and I am an electronics Junkie. Like you, I have walked around singing "I want an iPad" since since. And like you I am unwilling to part with $500 for it. I am recovering now as I have disciplined myself to only buy what I can afford without using credit cards or having budgeted for it. Kudos on your Kindle Fire, I hear they are amazing. I am probably the only electronics junkie left who is still firmly attached to, and endlessly buys, paper books. Aaaahhh ..

Sent from my Windows Phone

@Nikolas - I hope you get forgotten in that corner and freeze(or bake, depending on geographical grounding) to a hard, wrinkly junkie lol)

>Nik: Ha ha! Can't even hate tho - good for you. I've never figured out why I don't like Apple products, but I do.
I'm a reader, and that's why the Kindle fits. Talkin' 'bout a couple of books a weeks, at least. Not that you can't read Kindle Books on the iPad. But then again it'd be encouraging premature ergonomic arthritis, massive as the iPad is...

>Guess: Windows Phone? You're my 'shero!' Was this (>|<) close to getting one till the Android bug hit me.

Paper books rule tho, I must admit. But then again, it's kinda tight to be able to read your books in bed with all the lights off.

Yeah yeah yeah .. Til you find the Windows Phone has a Kindle too. And a piano, and clean, crisp, Slacker Radio with no adverts. What were you saying again? Oh I know: the more you have, the more you want. We are all electrojunkies :-/
G x

One junkie to the other, Holla and and I'll hook you up with a massive collection of books to last both our lifetimes and a generation or two after us.
After months of successful EPA (electronics purchasing abstainance) I fell off the wagon and recently bought the fire and I'm loving it. All my series collections are in fingertips reach while I wait for the next book installment.
The only added cost I've incurred is the amazon's prime membership which has perks than I can list here.
With the help of calibre, and a few friends I've managed to collect thousands of books most of which I don't think I'll ever get to read, but on e a junkie, always a junkie... and I want more and more. As of last night I have 3000+ and counting