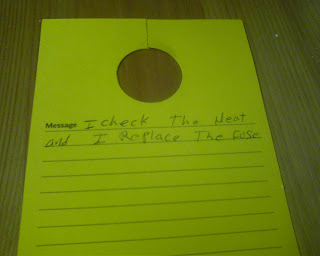 [I check the Heat
and I Replace The Fuse]
I have a strange relationship with my cellphone. I realize I need it, but I could care less where it is - till I have to make a call or text somebody. Kinda like the nice, to-the-point note the maintenance guy left me a few days ago, [above] I'm very to the point with the cellie, doing nothing I needn't do with it.

But it's never been like this before; I was always super-excited by cellphones before. Shoot, I remember getting my first cellie like it was yesterday. Leaving the AT&T store all those years ago, I could hardly keep my hands off it while driving home. Sure, everything was green and black on the display, and it was built like and shaped like a brick, but I couldn't get enough of it. I discovered every single one of its 'advanced' features that same night. The plans they had back then were horrendously expensive and I was roaming everywhere, but I didn't mind it one bit.

Every single year after that first cellie, I got a new one. The only other one I remember after that first one had *gasp* a color display! I thought that was the coolest thing I'd ever seen. And I could actually check, using the phone, how many minutes I had left for the month?! And send SMSs?! I was untouchable!!

Then Motorola came out with a phone that could actually play MP3s and was sync-ed through a then new-ish iTunes, and I had to get it. Truth be told, that was a sorry excuse for a phone, but I kept it for an entire year and a half, till I got the best phone I've ever had, a Sony Ericsson Walkman phone, which I kept for Lord knows how long.

But here's the thing about the Sony - it did everything so well, fulfilled my meager needs so completely, that I had no desire to get another for the longest - until it called it quits. After that, I lost all interest in cellphones, and I don't understand why.

I play with my friends' and workmates' smart-phones all the time, all the while oooh-ing and aaah-ing at how cool they are. I played with Crackberries, iPhones, Droids and everything in between and soon realized that I have the sh*ttiest phone I know. My lil' cousin has a better phone than I. Shoot, I don't even have a data plan! But does that bother me? Not one bit.

Am I losing my techie edge? I sure hope not. At least I keep abreast of other things like computers, but I'm still a far cry from how I used to be like. Help me, Steve Jobs. Help me, Bill Gates. Hell, help me, Tom Cruise.*

Oh my goodness! I shall not tell you what i am commenting on this your post on. And dude, i wish i was you as refers this telephone business.

@NiKolas - I shall not telleth you why I am addressing (undressing?) you on this other people's postings, but I will telleth you that it sucks beings you LOL

@>d .. I gave up the gadgetry a while back - kinda sorta moving to NE kilt my gadgetry mojo - but I have to say this: Google Maps on my phone is the coolestestest thing ever. Not sure how my life was before it. End of.

In other news, how goes life/you (if they are not mutually inclusive :) )

>Nik: I'll bet you'd freak out if, say, you left home and forgot the phone. No scratch that - you never leave home without it, right?

>G: Google Maps? Let me Guess (intended) - you have a Droid?

You know what, that does it. I think a Xmas gift to myself is in order!