"ALLOW ME TO RE-INTRODUCE MYSELF..."

Happy New Year y'all. Can't believe I've been gone so long, not just from the blog but the web too. Had to handle some business real quick, but I'm back now with a vengeance. Plus, I've only one class this semester - I too am in a recession of sorts - so I really got nothing but time. 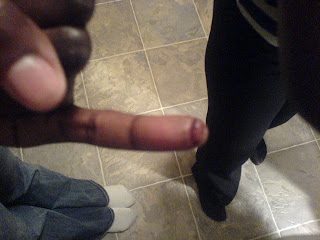 And oh yeah, it's been cold as f*ck. Global warming, my ass - they need to come up with a better theory. Or is that a better money-making scam? Yeah, I said it. I like my cars running on fossil fuel, thank you very much. And skip the catalytic converter. Won't need that.

But anyway, the path to my crib from the parking lot was covered in snow, but management had come thru with their snow-blower and cleared a path for everybody. How thoughtful. 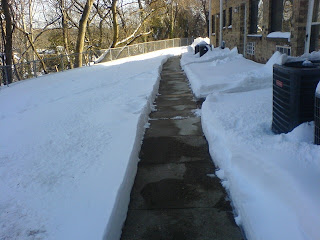 They could've at least been kind enough to save my doormat though. Yes, those black chunks you see are what used to be my mat; the blower chewed it right up. Gee, thanks. 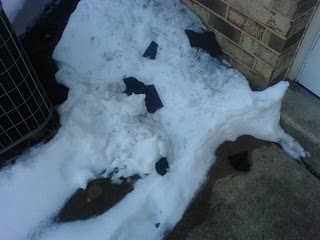 This year the company Christmas party was held on-site. I still had some work to do so I snuck off to finish it. If every workday were like that one, I'd be good! 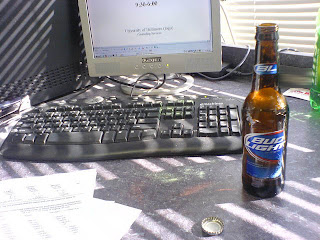 And this was around New Year's at a house-party. Truth be told, there wasn't much of this - and more - left after, even that horrid Burnett's. And you might guess correctly, from the abundance of sweet, chocolatey drinks, that there were lots of ladies at the bash. 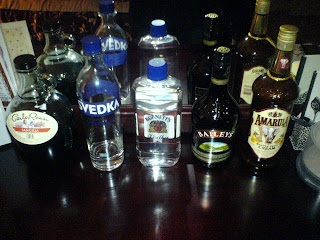 Not surprisingly, I guess, I worked on the car some. Here I'm studying the condition of an old spark plug I'd taken out prior to 'plugging' in a new one. 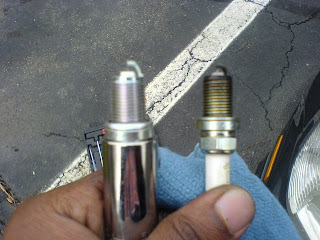 And speaking of studying, here is an accountant studying tax numbers. Never could do numbers - hate 'em. But I thrive in Physics, which is mostly numbers and concepts, go figure. 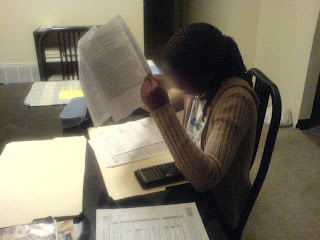 And this is definitely the last bit about studying - this is from last semester's Electronics class, an [extremely mean] electric motor from California's primary people-mover, a Toyota Prius. And don't let the Prius' bland exterior fool you; it really is quite brilliant in how it works. Borders on virtual reality. 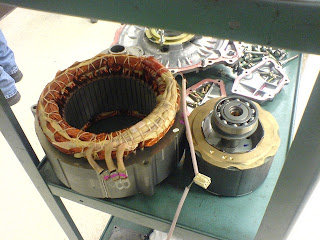 After all these years of not cooking at all, or even having the desire to, I wanted some of these so bad I actually made them myself. Granted, this may not even qualify as a meal in its simplicity, but you gotta start somewhere, right? 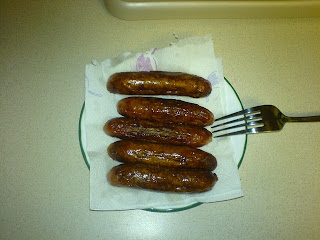 It still amazes me that I can look at these creepy-crawlies swimming about in a tank, and still go and eat them. But the real sicko was the first one who looked at a lobster and actually wanted to eat it. What was he/she on?! They don't look appetizing in the least! 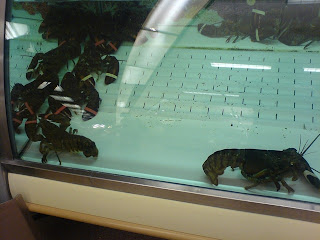 Hip-Hop verse of the day:

"I love your sushi roll, hotter than Wasabi
I'm racing for your love, shake-n-bake, Ricky Bobby..."

Hey D, Happy New Year to you ma friend. How many teeth are they pulling out again? Pole sana

Welcome back fam! Sorry about both your grills mainly your pearly whites. What, no pics for that? :) Anyways, hope all that dental work didnt put a dent in your budget though.

I will not approve on it. I think precise post. Particularly the designation attracted me to review the unscathed story.

>Farmgal: Don't even remind me! And I'm supposed to voluntarily go back there?!

>CloudVill: lol @ RIP Teddy Pendergrass. Or is that Teddy Penderass?
Tell me about it - dental work is pricey. Was hoping to delay all dental work & have it done in Kenya later, but this here got me!

Working at the office christmas party? Tsk tsk *grin* I got yelled at for carrying a book to mine ;-)

haiya, umekuwa mapengo? so how will you be chewing your meat now, ama you shall leave that for the tummy to work on, wait does this make you a cat now? :o) happy new year.

CB: Had to do it - one of our biggest clients. Besides, what stimulating conversation can I have with the people I've been working with for years?

Nik: I see you got jokes! Nah, the mapengo don't even interfere with the chewing process at all. Of course, there could be a problem should I encounter some Murang'an githeri...

Keep on posting such articles. I love to read articles like that. Just add some pics :)

Nah man. Any more pics & I might have to change the blog to a mag, someone told me!