The CRS [Can't Remember Sh*t] is getting worse, it seems. For whatever reason I clean forgot that I have another blog exclusively for car & techie stuff, so I won't put up another yawn-inducing post about cars and stuff here, like I'd originally intended.

My boy Steve-O is a straight clown. He stumbled across pics of, and I quote, Hyena Men. So he sent me the doctored photo below, along with the message:
"Hey - I found this picture on Kenya'sMostWanted.com"

It was unreal looking at myself with a hyena in tow. My workmates cracked up over it, as did I. 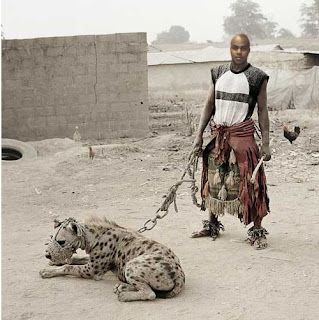 Have a good weekend, you dig?

Now that is some funny *ish!!! Hyena Man?? LMFAO! I like your clothes too. Contemporary with a traditional twist!!

Aren't you the funny one. Contemporary, huh?

Everything about this pic depicts toughness tho. [With the exception of my face, of course] Even that chicken in the background gotta be gangsta to have survived till it was grown, especially with hyenas and stuff running around. It probably even grew fangs & eats meat.

where can i get me one of those, the hyena, not the picture, me needs a guard dog that eats visitors...

I'd imagine tho that a hyena would be rather tamable, since it's more canine than feline, for one. But it would take someone very brave or very stupid to keep one. The fact that its jaws are strapped shut means there had been... ummm, accidents.


>Buff: I see you still got jokes! All I'd need is some headgear, with feathers and stuff, to clinch it,huh?