The other day I was listening to Jay-Z’s ‘30 Something’ and was liking it; not so much because I completely agree with him when he says that 30's the new 20, but because he breaks it down well, so much so that I was inclined to agree.

Besides, I’m steadily approaching that big 3-0 and though I’ve no qualms about turning 30, it helps that someone, even if it's Jigga, likes being 30-something.

That said, I must admit I don’t feel 29. Even though I’m more focused than ever in what I want to do and that was a long time coming, I still feel the same, though somewhat weathered. They say inside every man is a little boy, but my little boy is larger than life. I can act real stupid and goofy sometimes. I clown a lot, love doing new and fun and potentially dangerous stuff, dislike wearing neckties and such, etcetera. In short, I like doing things I never thought I’d still be doing at 29.

At work especially, I decided that the working experience is all about attitude, and so I try to like my job. Yes, I said it - work isn’t half bad. Of course boss-man still pisses me off like every day. Of course my Little Red Riding Hood-like co-worker is still clueless and of course, I still complain about the job, but that’s how I deal with it.

I try to make it all better. Like, some dude named Darryl quit and got another job a couple of weeks back so my [other] crazy co-worker and I went, with some printouts, to my company’s production area in the back, [where all the…. ummm, mischief happens coz there are no cameras there] shot and emailed him this photo, which is quite self-explanatory. 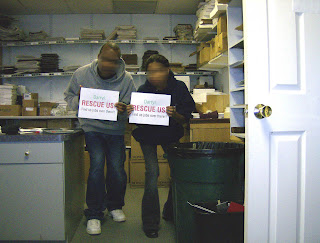 And that’s what I’m saying – even though I sometimes act a fool, getting older is good; up to a point, anyway. My mental vision now feels like it's 20-20, I kid you not. My younger friends are somewhat surprised that I’m being so optimistic about turning 30 in a few but hey, I’d rather be 30 and smart than 20 and stupid. And Lord knows I was dumb as a brick when I was younger.

Have a good, stress-free week. Try to anyway.

Wsup, 'friend.' Yeah, if only I knew then what I know now! But then again, I would've skipped all the fun I had f*cking up!

N oh what fun it can sometimes be...

I like the signs that you and your co-worker made...you have a wacky sense of humor!!

Thanks. What can I say; clowning about makes work more interesting!